Rivers of Steel: CommonWealth/CommonPlace
2016
Glass carbuoys, iron pipe, plexi, laser cut aluminum, Monangehela river water, chain
variable
BRADDOCK, PA. This installation was initially placed in the vault of steel magnate Andrew Carnegie’s original bank. It was designed to amplify a set of linguistic and spatial coincidences: That Carnegie’s bank, built to store his great wealth in the beautiful and impressive vault, instead now houses Braddock’s Heritage Community Initiatives, a social service organization that helps the disadvantaged. That the vault is situated directly across from “The Community Room.” That Pennsylvania’s constitution describes the state as a Commonwealth. That Braddock is where it is because of the river and the steel industry, and the fortunes of the town rose and fell like the level of the river and the fortunes of the industry. 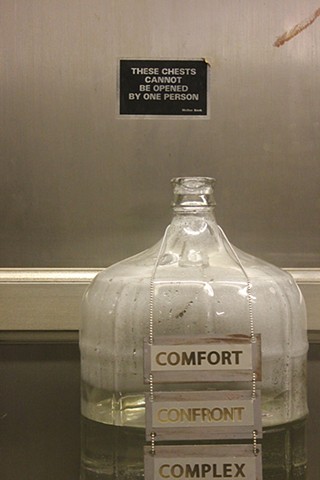