Victory Garden for the New Millennium
2008
Oil Barrels, plants, soil
Oil is at least part of the reason the Middle East is so important strategically. This Garden is planted in recycled industrial (oil) barrels, and planted with a new victory garden containing “fuel plants”: switch-grass, rapeseed and other plants that can be used to create fuel (either bio- diesel or ethanol.)

Since the processing and burning of carbon fuel / oil has also led to polluted and contaminated soil I included other barrels with plants that heal and re-mediate the soil by removing toxins and contaminants (mustard and kale for example, are hyper-accumulators, soaking up large amounts of toxins) 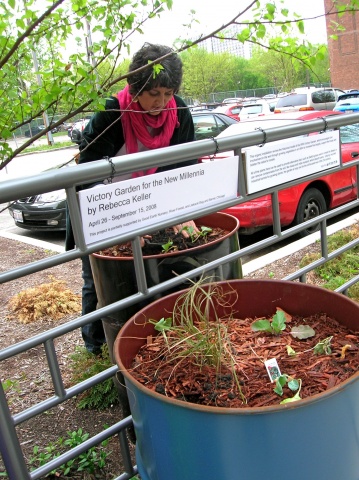